Nowadays, wind turbines are essential in generating renewable energy, which contributes to compete against the much-discussed subject of global climate change. They look simple, but wind turbines are really complex and large devices, which makes them difficult to maintain. Unfortunately, maintenance is a crucial point, since inaccurate decisions could have enormous consequences. Therefore, it is necessary to develop a strategy that ideally ensures optimal maintenance decisions.

Dear visitors of the ProgBlog,

We live in an era of increasing environmental awareness. This includes generating renewable energy, in which wind turbines play a major role. Namely, wind turbines convert the wind’s kinetic energy into electrical energy and therefore massively contribute in reducing carbon dioxide emissions. Another advantage is that wind energy will never run out, which makes us less dependent on other energy resources. However, wind turbines are gigantic devices and hence maintenance can be quite difficult.

Initially, maintenance activities were performed according to a predefined schedule, which can be categorized as “planned maintenance”. Planned maintenance aims to reduce the downtime of the wind turbine by having all necessary resources and parts in place, including a specific strategy to use them. This type of maintenance, however, seems far from optimal. In an ideal situation, we want to conduct maintenance just before the wind turbine would have suffered damage. Premature maintenance, i.e. maintenance conducted some time before a problem would have occurred, leads to redundant downtime. On the other hand, late maintenance, i.e. maintenance scheduled some time after a critical problem has occurred, leads to failure that could have been avoided. Moreover, high repair costs and long delivery times of expensive spare parts, which still need to be ordered due to unforeseen circumstances, will lead to additional expenses and downtime.

There is, however, another issue with this maintenance approach that can be easily overlooked. Namely, planned maintenance does not consider propagation of a failure, e.g., tiny cracks in a rotor blade due to a lightning strike will increase over time and may eventually lead to fatal damage in the gearbox. In the beginning the cracks are so little that they probably will remain unnoticed during a regular inspection. The cracks may be noticed during a later inspection, but it will most likely be a case of too little, too late.

To understand the magnitude of the problem, you should be aware that a replacement of just the gearbox alone may cost over $230,000 and that the repair time could easily take up to an entire week (Carroll, McDonald, & McMillan, 2016). Note that this only includes repair time and not times like travel time, lead time and time added on due to inaccessibility, so that the downtime will be even longer. During downtime the wind turbine is not profitable at all, so in this case time literally equals money. Therefore, this planned maintenance strategy combined with an unfortunate timing of failure will have tremendous consequences, especially in financial terms. The natural question that arises is: How we can improve our maintenance strategy in order to minimize the financial damage in case of an upcoming failure of the wind turbine?

This is where the notion of condition based maintenance comes into play. As the name already indicates, condition based maintenance is a strategy that monitors the actual condition of the wind turbine in order to decide when and what maintenance needs to be conducted. To this end, wind turbines are nowadays equipped with advanced sensors that are able to measure variables like temperatures, vibrations and power outputs. In this way we have enough real-time sensor data to keep track of the status of several parts while in operation and, thereby, monitor the condition of the wind turbine. By means of an appropriate statistical framework, which follows the Statistical Process Control methodology, we are able to construct a reliable control chart that includes for each time point a test statistic, corresponding control limits and a warning signal when the test statistic exceeds or falls below one of the control limits. This warning signal represents an out-of-control situation that could indicate a problem inside the wind turbine. Such control charts enable us to accurately and timely detect (small) deviations from normal behavior that could indicate upcoming failure. The deviations should then subsequently be traced back to the initial root cause, based on which appropriate maintenance decisions can be made. This strategy ensures optimal maintenance intervals, since maintenance is conducted only when it is needed. Furthermore, by having all necessary resources in place well in advance, the time spent on maintenance will be minimized. And last but not least, fast and reliable detection of decreasing performance minimizes overhead costs and downtime due to unexpected failure.

We will illustrate the benefits of condition based maintenance in a real life example, where we use wind turbine data provided by a Dutch energy supplier. The sensor data were collected within a period of almost two years and consist of 229,680 observations, which were measured every four minutes, for 110 variables. The most important variables can be subdivided into two categories: 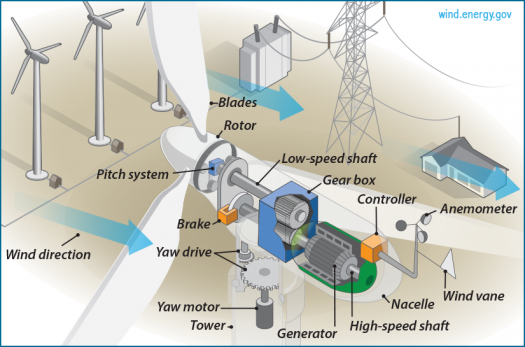 Figure 1: Basic overview of the inside of a wind turbine. Photo courtesy of the U.S. Department of Energy.

In order to get a better understanding of the inside of a wind turbine, most of the related components are visualized in Figure 1. We know that the wind turbine recently suffered a mechanical failure of the main generator. Although the problem was suspected, the identification of the root cause and the magnitude of the problem became apparent only during inspection after the failure. If we had followed a condition based maintenance strategy instead of a planned maintenance strategy, we would have obtained the following control chart: 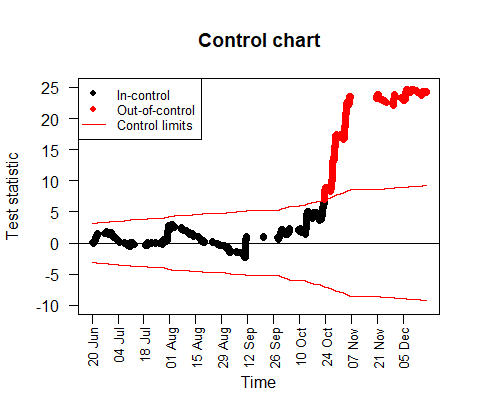 From this control chart we can conclude that some serious warnings started to pop up in mid-October, which could indicate a problematic situation inside the wind turbine. It is noteworthy that these warning signals arose approximately thirteen months before the failure of the main generator. If we assume that we were able to correctly identify the root cause at the time, we could have conducted proper maintenance and thereby prevent the main generator from failing. In this way we could have saved a huge amount of money by only having to pay around $3,500 for repair costs, instead of around $60,000 for replacement costs of the main generator. Additionally, we could have reduced the total downtime by at least 57 hours (Carroll et al., 2016). This particular example emphasizes the need for condition based maintenance as the benefits, both money and time-wise, are significant.

Are you interested in forecasts and energy? Learn more about this topic in our blog post (in German):